Toomey Shows Once Again Why He’s The Best Candidate For The U.S. Senate

Toomey Goes 2-For-2 in Debates

“As we’ve seen from these two debates, Pat Toomey is clearly the most qualified candidate in this race,” Sweeney said. “Pat Toomey is a leader in the ongoing efforts to lower taxes, create jobs, and end the corporate welfare system that made Katie McGinty a millionaire.

“Katie McGinty has a track record of raising middle-class taxes and lying about her background. Tonight we saw Katie McGinty run away from her failed record of tax increases on the middle-class and using the revolving door between the public and private sector to enrich herself.

“Anyone who was in Pennsylvania during the 2015 budget crisis knows that Katie McGinty is more than willing to impose major taxes on Pennsylvania’s working class. No amount of talking points from the Clinton campaign will change Katie McGinty’s support for taxes on diapers, day care, college textbooks and even nursing home care. Of course, anyone who’s followed Katie McGinty’s career also knows that her words don’t always match her actions.

“Congratulations to Pat Toomey on his two terrific debates. Now, it’s time to work harder than ever to elect Pat Toomey in November.” 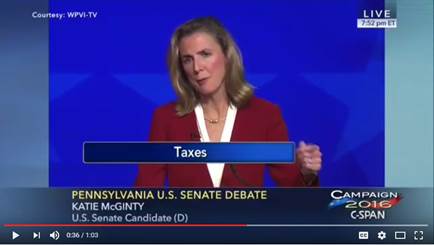 Pat Toomey: “Katie McGinty Has Raised Taxes On The Middle-Class In Every Job She’s Held In Government.” 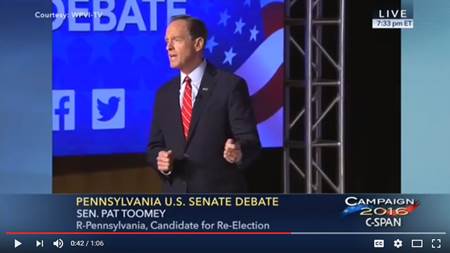 THE FACTS: During Her Last Stint in Government, Katie McGinty Supported The Largest Tax Hike In the Nation

Katie McGinty Supported A 20% Hike in the Income Tax

Katie McGinty Supported A 10% Hike in the Sales Tax

The Wolf-McGinty Tax Hikes Called For A 10 Percent Increase On The Sales Tax, And Expanding It To Include Many Goods And Services Used By Working Families All Across Pennsylvania. (“Read the full text of Gov. Tom Wolf’s budget address,” PennLive.com, 3/3/2015)