“Governor Tom Wolf and Katie McGinty have sacrificed the transparency they both promised to further McGinty’s political career.  They have spent more than fifteen months hiding McGinty’s government emails from the public. Katie McGinty has refused to call for her former boss to immediately stop using taxpayer dollars to hide her emails from the public, despite demands from the Office of Open Records and now the Commonwealth Court to release them. With her notorious pension for ethics problems and revolving door paychecks, the voters deserve to know exactly what Katie McGinty was doing while serving as Chief of Staff before they make their choice in the Senate election. Hillary hid her emails with a private server, and Katie McGinty is now hiding hers with taxpayer-funded lawyers. It raises the persistent question: what else are Katie McGinty and Tom Wolf hiding in those supposedly-public emails?” – PA GOP Communications Director Megan Sweeney

“The Wolf administration has been ordered to release more of the emails Democratic US Senate nominee Katie McGinty sent and received during her short tenure as the governor’s chief of staff.

The Commonwealth Court ruling caps a drawn-out battle between the administration and the state GOP.”

“Gov. Tom Wolf’s administration has 30 days to produce copies of more emails sent or received by Katie McGinty when she was his chief of staff, before she ran for U.S. Senate, a Pennsylvania court ruled Friday.

The emails, sought by the state Republican Party, do not have to be released before the Nov. 8 election.

“The Commonwealth Court’s ruling upholds a decision by the Office of Open Records.

“McGinty’s campaign spokesman said in an email that McGinty ‘is always on the side of transparency,’ but he did not respond to a follow-up email asking whether McGinty has asked the Wolf administration to release the emails.

“The state Republican Party said that, to date, 71 out of 15,000 pages of emails dug up in response to its request have been publicly released.

“‘The time has come for Governor Tom Wolf to stop hiding Katie McGinty’s emails from the public,’ GOP spokeswoman Megan Sweeney said in a statement. ‘For the past sixteen months, Katie McGinty has been able to hide her email behind a taxpayer-funded group of government lawyers.’”

“Friday’s decision stemmed from right-to-know request filed in July 2015 by Paul Engelkemier, state GOP deputy communications director. He sought copies of McGinty’s work calendar and emails. The governor’s office released some emails and schedule listings. It then withheld or redacted others, saying they were not related to government activity or were exempt from release.

“Engelkemier appealed to the state open records office, which ruled Wolf’s administration had to comply by turning over the emails to it so it could privately determine if the emails were public. The administration countered with an appeal to Commonwealth Court.

“The request sought specific government records the public has a right to see, countered Engelkemier’s lawyer, Adam Ennis. The administration’s claim that the records request was not specific enough is a “red herring,” he said. The judges sided with the GOP and ordered Wolf to comply with the order issued by the Office of Open Records.”

“A state appeals court says the governor’s office must release thousands of emails Katie McGinty sent and received in the six months she was Gov. Tom Wolf’s chief of staff. Commonwealth Court on Friday affirmed the decision of the Pennsylvania Office of Open Records, which had sided with the Republican Party of Pennsylvania in saying the Wolf administration should turn over the emails.”

“To date, only 71 out of 15,000 pages of emails in this request have been publicly released, 25 pages of which included an ad for cablewire.” 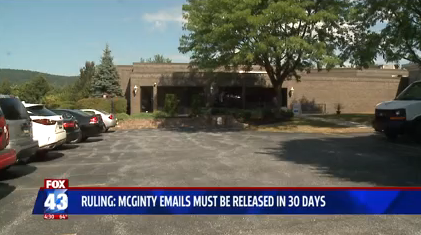 “A Commonwealth Court makes a major decision, concerning Toomey’s opponent in this election’s Senate race. The court ruled — that the Governor’s Office must release emails from Katie McGinty’s time as the Governor’s Chief of Staff — and they must be released within the next 30 days. That deadline is after Election Day — and the ruling doesn’t require the release of as many emails as the state GOP had requested.” 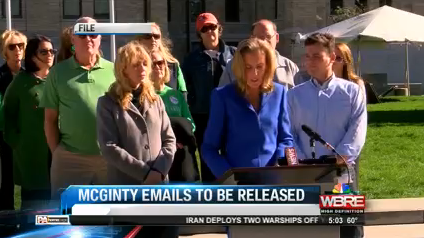 “Governor Tom Wolf’s Office was ordered today to release thousands of pages of emails from his then-chief of staff Katie McGinty to the state Republican Party. In july 2015, the GOP filed an open records request to access emails between Wolf and McGinty – who is now running for U.S. Senate against incumbant Republican Pat Toomey. The GOP said it wanted to learn from the emails how she performed in her job as Wolf’s Chief of Staff – and see any possible connections as she left public employment and moved into the private sector. The Wolf Administration tried to block the move, saying the request was too broad but Commonwealth Court disagreed today – ordering Wolf to release the emails within 30 days. That deadline would come after the November General Election.”