Hillary And McGinty: Partners In Lying

When it comes to lying about campaign contributions, it looks like Hillary Clinton is taking a page out of the Katie McGinty playbook.

Over the past week, both Katie McGinty and Hillary Clinton lied on camera about accepting campaign contributions from the oil and gas industry.

While Hillary made her dubious claim yesterday afternoon, McGinty has stood by her misrepresentation for most of the week.

You can see the video of Hillary’s deceit below; you can watch McGinty lying HERE.

Katie McGinty’s Distorts Ties to the Oil and Gas Industry

On Sunday, Katie McGinty Claimed She Had Not Received Any Campaign Contributions From The Oil And Gas Industries. Debate Moderator Paul Klein: “The question is, have you accepted or received the endorsement or have you accepted any campaign contributions from the following organizations: The National Rifle Association, Pennsylvania’s LIFE PAC, and the oil and gas industries…How about these three?” McGinty: “No.” (U.S. Senate Candidate Forum, Carnegie Mellon University, 1/31/2016)

Today, At A Town Hall Event In New Hampshire, Clinton Denied Taking Campaign Money From The Fossil Fuel Industry, Saying Any Donations She Received “Must Have Put It In The Wrong Envelope…” QUESTIONER: “Hello, thank you for being with us this afternoon. You’ve taken many strong stands and actions for human rights, women’s rights, and education in your campaign. These are actions which Republicans have often overlooked or ignored. You’ve also said that you support renewable energy in our country but have taken over $150,000 from the big oil and gas industries. These are industries which are in direct conflict with your interest in renewable energies, and I’m wondering if you’d be willing to take one step further away from the Republicans and take a stand against any more [garbled] campaign contributions from them?” CLINTON: “Yeah, I don’t even know what you’re referring to, but big oil knows I’m not their friend, so I can’t imagine. They must have put it in the wrong envelope, because I’ve been very clear about that. And I want to take away all their subsidies, I’ve been public about that. We’re going to move those $6 billion a year into clean renewable energy. You know, I will certainly take a hard look at that. It is not something that I’ve paid any attention to, because they know where I stand, and they know what I will do.” (Hillary Clinton, Remarks At Town Hall, Dover, NH, 2/3/16) 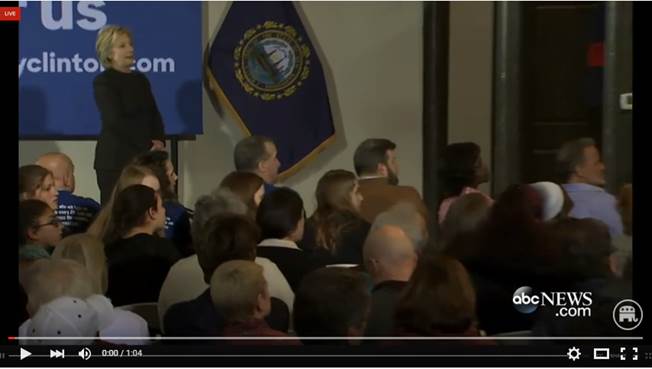 CLINTON REFUSED TO SIGN A PLEDGE TO NOT ACCEPT DONATIONS FROM THE FOSSIL FUEL INDUSTRY, WHICH HAS SINCE DONATED HEAVILY TO HER CAMPAIGN

Clinton Blew Off A Request From The Nation And 350 Action For Presidential Candidates To Pledge Not To Take Money From The Fossil Fuel Industry, A Pledge Both Of Her Democratic Opponents Signed. “Politically engaged environmental activists say Clinton has yet to prove herself. One example came when 350 Action, an affiliate of the environmental group founded by McKibben, joined the liberal magazine The Nation in asking candidates to swear off campaign money from the fossil-fuel industry: Sanders signed on early, and O’Malley followed suit Tuesday. But “Hillary Clinton, like the 14 Republican candidates contacted, did not reply” to the request, the magazine wrote.” (Elana Schor, “Can Hillary Clinton Lead The Keystone Army?” Politico, 7/11/15)

This Election Cycle, Clinton Has Accepted $226,554 From PACs And Individuals In The Oil And Gas Industry. (Center For Responsive Politics, Accessed 2/3/16)

Clinton’s Campaign Bundlers Are Lobbyists For The Fossil Fuel Industry

Lobbyists That Represent The Fossil Fuel Industry Are Raising “Stacks Of Money” For Clinton’s Campaign. “Hillary Clinton took aim this week at the pharmaceutical industry and the Keystone oil pipeline. But that doesn’t mean the Democratic presidential front-runner isn’t enjoying the support of lobbyists representing drug and oil companies in Washington, many of whom are helping raise stacks of money for her campaign.” (Catherine Ho, “Clinton Takes Aim At Pharma, Keystone – But Industry Lobbyists Still Provide Campaign Cash,” The Washington Post’s Power Post , 9/24/15)