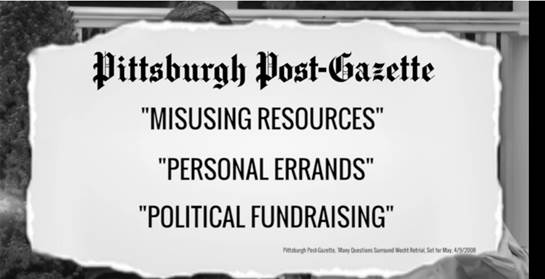 Entitled “Play by the Rules,” the video highlights witness testimony claiming Cyril Wecht used government resources to further the campaign of his son David. In a recent ad, David puts his father, Cyril Wecht, front and center claiming Cyril taught him about “playing fair and following the rules.”

“The court has been under a dark cloud and we need to elect justices who have the full faith of the public to help reform our courts. With this history, how can we trust David Wecht to ‘play by the rules?’”

Below is a transcript of the Republican Party of Pennsylvania’s latest video, “Play by the Rules”:

Voice-over: “Have you seen this ad?”

David Wecht: “My dad taught me about playing fair and following the rules.” [1]

Voice-over: “Who’s he trying to fool?

“Stop Wecht, Dougherty, and Donohue — politicians who plan by their own rules.”