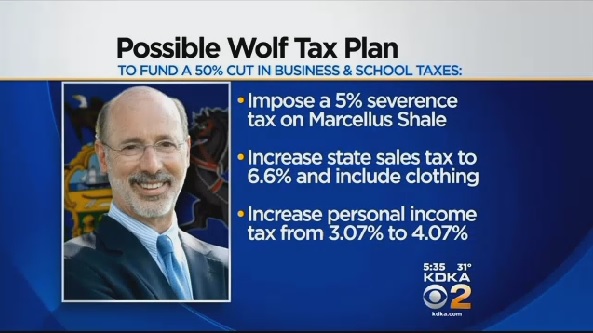 HARRISBURG — Republican Party of Pennsylvania Communications Director Megan Sweeney released the following statement regarding a report that Governor Tom Wolf would be proposing a hike in the sales tax from 6 to 6.6 percent.

“Governor Wolf is breaking his promise to voters not to raise the sales tax after less than two months in office,” Sweeney said. “Throughout the course of his campaign, Governor Wolf gave very few specifics about his plans for Pennsylvania but clearly portrayed himself as an opponent of raising the sales tax, only to break his promise to the voters with this first major act.

“Governor Wolf owes the people of Pennsylvania an explanation for breaking their trust.”

Then: Tom Wolf the Candidate Speaks Out Against the Sales Tax

Wolf Goes Out Of His Way To Voice His Opposition To Raising The Sales Tax “Tom Wolf has clarified that he opposes an increase to the state sales tax.” (Borys Krawczenuik, “Wolf does not support increase of sales tax,” Scranton Times-Tribune, 3/28/2014)

Wolf: Raising The Sales Tax Would Hurt Lower-Class Pennsylvanians Wolf, however, does not support an increase in sales taxes, saying he views it as falling too heavily on lower-income consumers. (“Tom Wolf says richer Pennsylvanians to pay more income taxes to lower property taxes,” Associated Press, 7/26/2014)

Now: Tom Wolf Will Call For A 10% Increase In the Sales Tax

Wolf To Call For Major Sales Tax Hike “To pay for a 50 percent cut in both business taxes and school property taxes, Wolf will ask for a 5 percent severance tax on Marcellus Shale drilling, an increase in the state sales tax from 6 to 6.6 percent while expanding the sales tax to cover clothing and professional services, and a one percent hike in the personal income tax from 3.07 percent to 4.07 percent.” (Jon Delano, “Gov. Wolf Looking At Both Cutting & Raising Taxes,” KDKA, 2/25/2015)