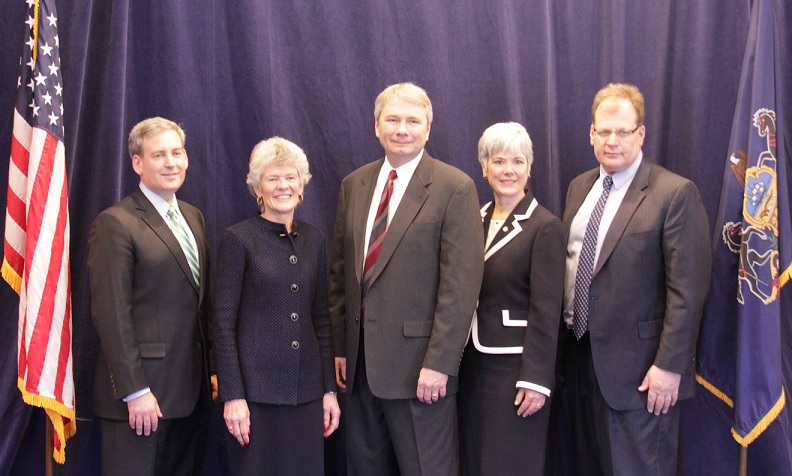 “I want to congratulate Supreme Court candidates Anne Covey, Michael A. George, and Judy Olson, Superior Court candidate Emil Giordano, and Commonwealth Court candidate Paul Lalley for earning the support of the Republican Party of Pennsylvania,” Gleason said. “After engaging in an open and transparent process, the members of the PA GOP chose a team of candidates with a shared respect for the rule of law and desire for judicial reform that will appeal to voters across the Commonwealth.

“The Republican Party of Pennsylvania has the best grassroots network in the nation, and we are ready to get to work on behalf of a statewide judicial team that can restore the public’s trust in our court system.”

Radio actualities of the candidates are available here.

Judge Anne E. Covey was elected to the Commonwealth Court in 2011. In her campaign for the Commonwealth Court, she pledged to be a fair and impartial arbiter who would interpret the law, not legislate from the bench. She also pledged to be vigilant in protecting taxpayer dollars and upholding the supremacy of the United States and Pennsylvania Constitutions. Over the past three years, Judge Covey has delivered on these promises.

Judge Covey has interpreted the law in a fair and efficient manner and has not used foreign law as either a precedent or as informing her decisions and opinions. Judge Covey’s decisions have sought to be clear and concise, yet detailed enough to provide litigants with an understanding of the law. Such unambiguous decisions reduce the need for future litigation and expense to our economy and to taxpayers.

In addition to her service on the Commonwealth Court, Judge Covey has over 25 years of experience practicing civil law in Pennsylvania and states throughout the country. She has worked for several large law firms and has operated her own private law practice.

Judge Covey understands and appreciates the hard work of our local Republican activists. Prior to running for Judge, Anne Covey was a volunteer for the Bucks County Republican Party and served on her township’s local Republican Committee. Judge Covey, who is 55 years young is married, and she and her husband have two children. She and her family have been volunteers for Upper Makefield-Newtown Soccer Club and Upper Makefield Baseball Association and are members of St. Martin Roman Catholic Church.

President Judge Michael A. George, born in McKeesport, Pennsylvania, received his B.A. from Washington and Jefferson College where he graduated cum laude and his Juris Doctorate from the Dickinson School of Law. He joined the Gettysburg firm of Campbell and White as an associate in 1985 and became a partner in the firm in 1992 practicing in family law, municipal law, civil litigation, and criminal defense. In 1995, he was elected as Adams County District Attorney and was re-elected in the year 1999. In June of 1996, he became Adams County’s first full-time District Attorney. In 2001, he was elected as a Judge for the Adams County Court of Common Pleas to begin his term on January 7, 2002. He was retained through election in 2011. In January, 2013, he became President Judge for the 51st Judicial District.

He has served as Chairman of the Adams County Criminal Justice Advisory Board since its inception in 2007. Formerly, he served as a member of the Adams County Prison Board and as Administrative Judge for the Adams County Department of Probation Services, the Adams County Civil Rules Committee, and the Adams County Criminal Rules Committee. He is a former Executive Committee Member for the Pennsylvania Conference of State Trial Judges and has been recognized with receiving the “Golden Crowbar Award” from the Pennsylvania Conference of State Trial Judges for significantly advancing the goals of the judicial system. He has lectured at continuing legal education programs sponsored by the Pennsylvania Bar Institute. In 2001, he received commendation from the Pennsylvania State Police for his leadership in successfully prosecuting the perpetrators of a previously unsolved horrific murder. He has been honored with the “Man of the Year Award” from the State Association of Catholic War Veterans for his dedication to veterans; the “Optimist International Law Enforcement Award” by the Optimist Club of Gettysburg; the “Annual Recognition Award” from the Healthy Adams County Domestic Violence Task Force; and has been recognized by the Greater Gettysburg N.A.A.C.P. for promoting diversity, equality, and unity in the community.

In April of 2010, he was a member of the Adams County Court of Common Pleas which received the Governor’s Award for Local Government Excellence from the Department of Community and Economic Development. He is formerly a member of the Executive Committee for the Pennsylvania District Attorney’s Association where he served as Chairman of the Training Committee; the Pennsylvania District Attorney’s Institution; the Pennsylvania Association of Criminal Defense Attorneys; the Pennsylvania Child Abuse Coalition; and the Governor’s Commission on Juvenile Crime. President Judge George is committed to the Court’s responsibility to deliver dignified, respectful, and efficient service to the community in a manner which promotes the rule of law while preserving justice for all.

He resides in Gettysburg with his wife, Karen, and two children, Justin and Brittany.

Judge Judy Olson serves as a Judge on the Pennsylvania Superior Court, a position she was elected to in 2009. In 2008, Judge Olson was appointed as a Judge on the Court of Common Pleas of Allegheny County, in the Civil D ivis ion. She was nominated by Governor Edward Rendell to fill a vacancy left by a retired judge. Prior to becoming a judge, Judge Olson practiced law for 27 years in state and federal courtrooms throughout the country. She represented both plaintiffs and defendants in claims for negligence, defamation, breach of contract, business torts, professional liability, personal injury and other civil cases. She also represented defendants in white collar crime matters. In addition to her trial experience, Judge Olson participated in numerous appeals in state and federal appellate courts in cases involving constitutional, commercial, statutory and common law issues. She also served as a private mediator and an arbitrator for the United States District Court for the Western District of Pennsylvania and the Court of Common Pleas of Allegheny County, Pennsylvania.

Judge Olson has received numerous honors during her career, including receiving the highest recommendation of the Pennsylvania Bar Association for a seat on the Superior Court. The Pennsylvania Bar Association rated her “Highly Recommended” and noted that “her character an d integrity are beyond reproach” and “she is regarded by her peers as intelligent, ethical, congenial an d fair”.

Judge Olson believes that giving back to the community is important in one’s lifetime. She has shown a commitment to community activity through her work in numerous organizations, including the American Heart Association, St. Francis University (where she serves on the Board of Trustees) and her church.

Judge Olson has been married to her husband Jim for 33 years. They have two children, Grant and Sophia. She is proud to have lived in Pennsylvania her entire life.

Emil Giordano has a unique record of varied judicial experience, proven leadership ability and implemented organizational success. He has presided over innumerable criminal, civil, domestic and commercial matters following a litigation career which honed his understanding and capability in those same areas of the law. He has presided over 80 jury trials following a career as a seasoned litigator who tried cases to over 20 juries in both federal and state courts. He is currently commencing the first year of his tenure as Administrative Judge of the Domestic Relations Section, that section met all 4 state-mandated performance measures for the first time in its history.

Under his direction as Administrative Judge of the Orphans’ Court Division, Northampton County became the first county in Pennsylvania to require nationally recognized certification for all court-appointed attorney guardians. His non-judicial experience includes serving as an assistant district attorney, a public defender in 2 counties, solicitor to 6 municipalities and various non-profit organizations, insurance defense litigator and lead trial counsel in a private practice of law engaged in civil rights, personal injury and complex construction litigation. He also serves as an adjunct faculty member at DeSales University and Moravian College.

An experienced attorney, Paul focuses his practice on labor and employment, municipal law/school law and appellate law. Paul has experience successfully representing clients in both the Pennsylvania Supreme and Commonwealth courts.

Paul and his wife Jessica are raising their two daughters, Felicity and Reagan, in Allegheny County where he is a lawyer at Campbell, Durrant, Beatty, Palombo and Miller, P.C. Paul is a graduate of the University of Pennsylvania and received his J.D. from the Dickinson School of Law. After law school, Paul clerked for former Supreme Court Justice Sandra Schultz Newman. Paul was raised in Montgomery County where his father, Frank Lalley, served as Sheriff for fifteen years and was a longtime member of the Republican State Committee of Pennsylvania.