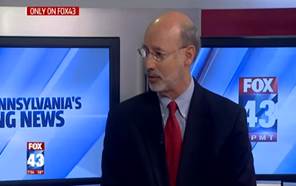 Tom Wolf says couples “could file separately” to avoid his proposed income tax hike.
You can listen to his comments here.

HARRISBURG — In response to Tom Wolf’s comments that Pennsylvania married couples will be hit with an even higher income tax hike, Republican Party of Pennsylvania Communications Director Megan Sweeney released the following statement.

“It is clear that Tom Wolf has crafted a punitive income tax hike that is a direct attack on Pennsylvania families,” Sweeney said. “The addition of a Marriage Penalty tax is the latest scheme centered around raising taxes. It should be no surprise that he wants to force families to search for tax loopholes because he is a loophole expert who pays a tax rate that’s less than half of what middle class Pennsylvanians pay. This is further proof he’s more concerned about growing the size of government regardless of the cost to Pennsylvania families.

“Wolf’s comments should serve as a warning sign to all Pennsylvanians that Tom Wolf is running to raise their taxes.”

On WPMT this morning, Tom Wolf was asked about his the effect of his income tax hike on Pennsylvania families. Wolf responded that couples “could file separately.”