Schwartz Doubles Down On “Keep Your Plan” Lie

Why did Allyson Schwartz’s staff take the time to update her Obamacare page with her comments from the Ways and Means committee, but fail to remove a line that the White House, Democrats in Congress, and countless media outlets have already deemed false?

The Washington Post gave the President Four Pinocchios for lying to the American people for making the same claim Rep. Allyson Schwartz makes on her website: “If you already have healthcare coverage you like, you can keep it.” Yesterday, WTAJ reported that 140,000 Pennsylvanians will lose their coverage next year as Highmark discontinues 180,000 individual health plans thanks to Obamacare.

We actually had more respect for Rep. Schwartz when she took down her entire page because we caught her in a lie. But she is now doubling-down on the same false advertising to blatantly mislead Pennsylvanians and cover-up her staunch support of a disastrous law that will be a political liability for her.

If you’re just tuning in to Rep. Schwartz’s website saga, here’s a recap: 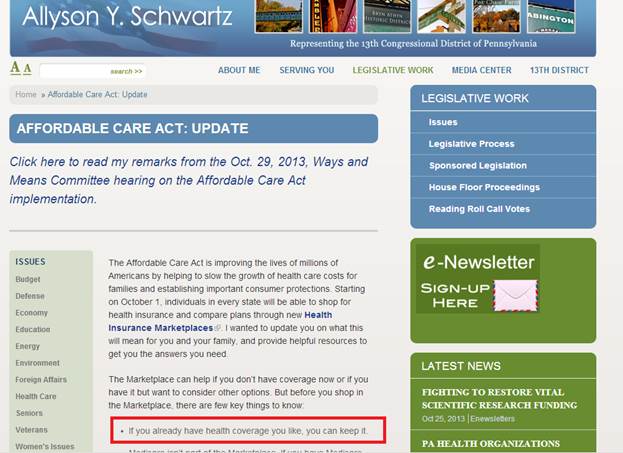