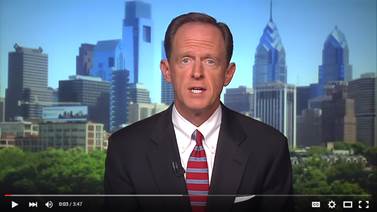 PHILADELPHIA — In the Weekly Republican Address, Senator Pat Toomey of Pennsylvania previews the upcoming Senate debate on the President’s Iran nuclear deal. This week, the Senate will take up a resolution to disapprove of the President’s Iran agreement. ‘And this deal would give Iran the capacity to inflict harm in much more destructive ways than it is currently able to do. This deal will make military conflict more likely, not less,’ Says Toomey. The audio of the address is available here, the video is available here and you may download the address here. A full transcript of the address follows:

“Thank you for listening, and I hope you are enjoying a great Labor Day weekend with friends and family.

“Next week, the Senate is likely to debate the Iran nuclear weapons deal.

“What’s at stake here is nothing less than the possibility of giving hundreds of billions of dollars to the world’s largest and worst state sponsor of terrorism, and ultimately paving the way for this outlaw regime to obtain nuclear weapons.

“As such, this is one of the most important Senate votes in a very long time.

“Over the years, I, and many others, have warned of the dangers America and our allies face when it comes to the Islamic Republic of Iran.

“In the past several weeks since the deal was announced, I have carefully studied it.

“I’ve read the language of the agreement, consulted with experts, and had numerous briefings on its implications, including classified briefings.

“I can tell you unequivocally, this deal is very dangerous.

“It will make America, and the rest of the civilized world, less safe.

“At the heart of the issue is whether Iran has given up its 30-year quest for nuclear weapons.

“Nothing in Iran’s words or deeds shows any evidence that it has.

“A country that is uninterested in nuclear weapons doesn’t need any of that. This deal ends up legitimizing Iran’s nuclear program, not stopping it.

“We know Iran cannot be trusted.

“Yet, President Obama argues that the deal contains inspection provisions that will catch any Iranian cheating.

“But the actual inspection system is full of holes. It is nothing like the ‘anywhere, anytime’ inspections we were told were being negotiated. The deal allows Iran to delay for 24 days inspections that are necessary.

“There are also other serious problems with the deal that go beyond Iran’s nuclear program.

“We know that the tyrants in Iran are directly responsible for killing Americans in Iraq, Afghanistan, and Lebanon.

“We know Iran is the chief weapons supplier to Hezbollah, which used those weapons to regularly attack Israel.

“We know Iran was heavily involved with destabilizing and overthrowing the government of Yemen.

“We know Iran has in the past, and is currently, holding Americans hostage.

“We know the Iranian streets are filled with chants of ‘Death to America,’ and their leaders openly threaten to ‘wipe Israel off the map.’

“This deal doesn’t address any of that.

“Instead, the deal removes economic sanctions up front, removing our greatest leverage and providing Iran with over one hundred twenty billion dollars in cash within months.

“This massive cash infusion to the Iranian terrorist machine will cause untold destruction and misery throughout the Middle East, and potentially to Americans.

“The deal jeopardizes American security in a fundamental way. Like all of the radical Islamic terror movements, if Iran is able to inflict harm on Americans, it will do so.

“And this deal would give Iran the capacity to inflict harm in much more destructive ways than it is currently able to do. This deal will make military conflict more likely, not less.

“There is a growing bipartisan consensus against the deal. Several leading Democratic senators and members of the House have joined Republicans in opposing the deal.

“I urge you to speak out and encourage your Senators and Representatives to vote against the deal. It’s not too late to save America from this disaster.

“I’m Senator Pat Toomey, and I thank you for listening.”