Wolf Talks About His Support For A Marriage Penalty Tax, Gets Booed 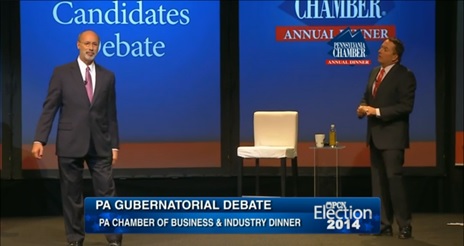 “Tom Wolf doesn’t seem to understand why families are rejecting his plans to institute a marriage penalty tax,” Sweeney said. “During last night’s debate, Tom Wolf tried to lecture Pennsylvanians about why a higher tax on middle-class married couples would fit his agenda. The fact that Tom Wolf seemed confused as to why people would not support a marriage penalty tax goes to show just how out of touch he really is.

“Tom Wolf’s marriage penalty tax may be the only detail Wolf knows about his own tax plan. Last night’s debate served as a microcosm of Tom Wolf’s campaign strategy of denying the facts and deflecting the tough questions by playing ignorant.

“If he’s elected, does Tom Wolf expect to spend four years telling Pennsylvanians he doesn’t have a detailed plan to address the biggest challenges facing our Commonwealth? Does Tom Wolf think he can throw out a few liberal talking points and expect Pennsylvania to accept that over actual policy proposals?

“For someone who loves to tout his educational background, Tom Wolf loves to revel in his ignorance regarding his own policy proposals. Last night’s debate served as proof that Tom Wolf is simply not ready to lead our Commonwealth.”

On September 8, Tom Wolf told WPMT that couples looking for a tax loophole for his income tax hike “could file separately.” (WPMT, 9/8/2014)