NEW WEB VIDEO: Tom Wolf: “I Was Looking For Weapons” At Rural Event 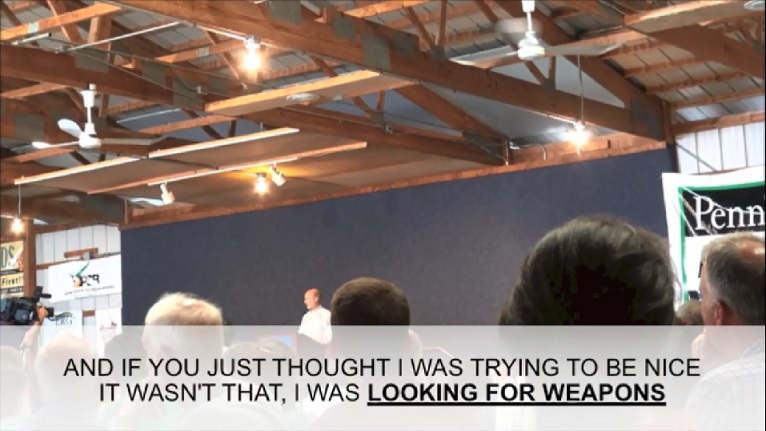 HARRISBURG — In response to Tom Wolf’s recent comments about “looking for weapons” at Penn State’s Ag Progress Days, the Republican Party of Pennsylvania has released a web ad highlighting the similarities between his comments and those of President Barack Obama in 2008.

“Does Tom Wolf believe that Pennsylvanians ‘cling to their guns and religion’ like President Obama?

“Tom Wolf’s distasteful remarks should serve as a cause of concern for all Pennsylvanians who cherish 2nd Amendment Rights and Pennsylvania traditions.”

During a speech during Tom Wolf’s Ag Progress Days at Penn State, Democratic gubernatorial candidate Tom Wolf quipped, “By the way, I wasn’t going around and saying hi to people earlier, before Stephen started. If you thought I was trying to be nice, I wasn’t. I was looking for weapons.”

Where do the candidates for Governor on the 2nd Amendment?

Tom Wolf? Let’s hear him in his own words

Tom Wolf on video saying, “By the way, I wasn’t going around and saying hi to different people earlier, before the speaking started. And if you thought I was trying to be nice, it wasn’t that . I was looking for weapons.”

What did he say?

Tom Wolf on video saying, “And if you thought I was trying to be nice, I wasn’t . I was looking for weapons.”

“Looking for weapons?” We know who that sounds like…

President Barack Obama saying, “So it’s not surprising then that they get bitter and cling to guns or religion or antipathy towards people who aren’t like them as a way to explain their frustrations. (“NRA: Barack Obama — ‘bitter gun owners’,” NRA on YouTube, 5/21/08)

Looking down their noses… for your guns.

Screen: Find out more at TomWolfFacts.com

Paid for by the Republican Federal Committee of Pennsylvania. Not endorsed by any candidate or candidate committees.