“Today, we mourn the loss of one of Pennsylvania’s great leaders. Bill Scranton, a veteran, U.S. Congressman, Pennsylvania Governor, presidential candidate and U.S. Ambassador to the United Nations, was a dedicated public servant and a national figure in American politics. Following his retirement, Governor Scranton remained an important figure to the people of Pennsylvania and we cherish his contributions to our Commonwealth and country. We extend our deepest sympathies to Governor Scranton’s family, and our heartfelt thoughts and prayers are with them.” 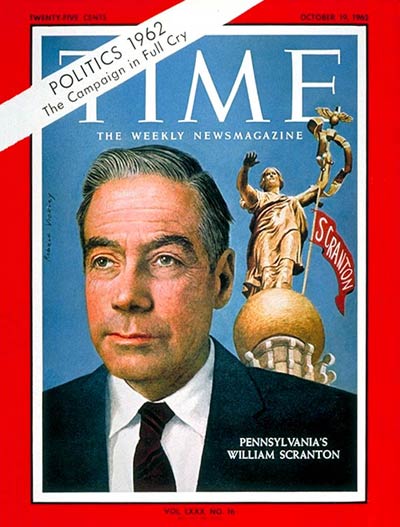 William W. Scranton earned a Bachelor of Arts degree at Yale University in 1939. His law studies at Yale were interrupted by World War II, during which he served as an Airport Transport Command pilot with the U.S. Army Air Corps. Discharged with the rank of Captain when the war ended, he remained active with the Air Force Reserve for another twenty years before retiring with the rank of Lieutenant Colonel.

After completing his law studies, he began a law practice in the City of Scranton. In 1959 he was appointed a special Assistant to the Secretary of State, whom he later succeeded for a brief period before winning election to the U.S. House of Representatives. He won the governorship of Pennsylvania after serving one term in the House.

During Scranton’s governorship, major educational reforms were achieved, including the creation of a community college system, a state Board of Education, and the Pennsylvania Higher Education Assistance Agency to help widen student access to college. Scranton also initiated a program to promote Pennsylvania in national and world markets and to make the state more attractive to industries and buyers of Pennsylvania products and services. During his tenure, Scranton was a member of the National Governors Association’s Executive Committee in 1965 and 1966.

President Gerald Ford appointed him U.S. Ambassador to the United Nations, a position in which he served only briefly but with distinction. In 2000, Scranton became the third recipient of the Pennsylvania Historical and Museum Commission’s Pennsylvania Founders Award, bestowed upon living persons who embody the ideals of William Penn in individual rights, religious tolerance, representative government, public support of education, and free enterprise.