McCord Enters Democratic Primary With Head Still In The Sand

“Yesterday, the 2014 Democratic Primary welcomed another tax-and-spend liberal in Rob McCord. This is the same Rob McCord who has shown zero interest in solving our pension crisis in his taxpayer funded role as State Treasurer. This proves Rob McCord is just another candidate in the mold of Allyson Schwartz, Kathleen McGinty, Tom Wolf and John Hanger who are just too out-of-touch to tackle the tough issues facing the Commonwealth,” Chairman Rob Gleason said.

In an interview with the Patriot News, McCord said, “Some people are saying it’s a crisis — that it’s Armageddon — but it’s not,” said state Treasurer Rob McCord. “This governor is panicky. He responds to challenges the same way a pit bull responds to sudden movement.” Chairman Gleason also released the following statement regarding McCord’s comments:

“If Governor Corbett is a pit-bull attacking the fiscal problems facing Pennsylvania, Rob McCord is like an ostrich that puts his head in the sand. Isn’t alarming that Rob McCord, the supposed steward of our taxpayer dollars, either doesn’t know how serious Pennsylvania’s unfunded pension liability really is, or he just doesn’t have the guts to fix it? It’s an embarrassing admission from Rob McCord, one of Pennsylvania’s top fiscal officers, to not understand how serious our fiscal problems really are.” 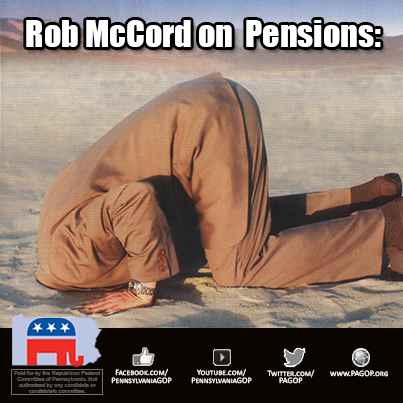 Corbett’s measures are “fair and necessary”

Current pension system is “clearly apparent” and is a “huge problem”

Things will only get worse if nothing is done

Ignoring the problem is fiscally irresponsible: